What is the Significance of the Angel Headstone?

When you are choosing a fitting memorial for a recently departed loved one, you may feel that you want to remember them with a traditional headstone design or you might be in search of something different. At Memorials of Distinction we cater to a wide range of styles, so among our collection you are sure to find something to suit your needs.

No two lives are the same, so there will be unique and special reasons why you want a certain design for your departed loved one’s headstone. However, it is always worth considering some of the most popular designs – as the reason that these are so widely chosen is that they bring a meaningful significance for a lot of people.

The angel headstone is one of the most popular headstone design features around the world. The team at Memorials of Distinction explain the meaning behind this design and why it means so much to so many people in their time of grief.

What is the angel headstone?

There is no single angel headstone; people incorporate angel motifs into all sorts of headstone designs as they are an elegant, meaningful and ultimately comforting addition to any memorial. 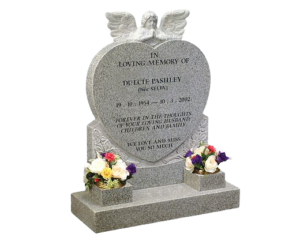 Angels are supernatural and powerful beings which exist in many religions around the world. They are generally believed to act as an intermediary between God and humankind, but they do more than simply convey messages from one to the other. Angels are primarily seen as guiding and protective spirits who watch over humans in day-to-day life. In the Christian tradition, angels appear at key moments of celebration in the stories of the Bible, such as the foretelling of the birth of Jesus in Bethlehem by the angel Gabriel.

There are a number of angel headstone designs which are particularly popular, such as the weeping angel, also known as the angel of grief. This depicts a large angel with two outspread wings, kneeling and slumped in grief over a tombstone.

It illustrates not only overwhelming grief but something more than this – the angel is kneeling with her arms outstretched in a protective stance. The motif of a loved one being protected by an angel is a recurring theme in gravestone designs, which could be one of the reasons why the angel design is so popular.

Where does the angel design come from?

Angels have been depicted in art for thousands of years, longer than Christianity has existed. Despite their otherworldly nature, traditionally they are portrayed today as quite humanistic and having large wings, halos and very peaceful, protective stances. 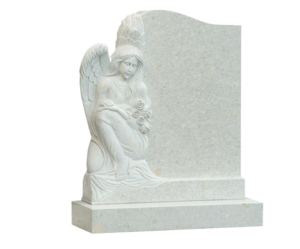 The idea of angels having wings dates back to Byzantine artworks of the 4th century. Following this period, and as Christianity evolved, the appearance of angels in art shifted from being cherubic and Cupid-like to being more earthly and human.

The popularity of the angel motif has translated from popular art to headstone design. As headstones have evolved over the centuries from being fairly basic and made from fieldstone to more intricate designs made from other materials, angels have become a key feature. However, the stance taken by the angel can have different meanings.

What does an angel mean on a headstone?

Angels with their wings outstretched or pointing upwards usually represent the departed person’s soul being escorted to heaven. If the angel is facing downwards or weeping this is often an illustration of an untimely death.

However, it is important to remember that angels mean different things to everyone, and there is no reason why this highly symbolic and powerful image cannot be incorporated into your loved one’s headstone design whatever your beliefs or circumstances.

While traditionally religious icons, angels represent a lot even to people who have no religious belief. The comfort of knowing that your loved one is being watched over and protected on their journey beyond this life cannot be underestimated. At this difficult time and in years to come a carefully chosen headstone design can bring a lot of solace and peace.

Speak to the team at Memorials of Distinction about the type of headstone design you are looking for and we will do our very best to incorporate the details that mean something to you. We understand that this is a big and often daunting decision, and are here to advise and guide you through the process.

We can not recommend Memorials of Distinction highly enough. As a family we wanted to order two memorials for two cemetery family plots, this could have been very stressful. From the moment of making the initial phone call to book an appointment at the Dunstable branch to completion of the memorials, the staff were very polite, friendly and helpful with a good knowledge to advise on how the end product would look. This was all during the COVID pandemic and although there was a delay at the docks on the material being delivered we were constantly kept updated with the progress. Now the memorials have been placed we could not be more pleased with the quality of the workmanship and without doubt would certainly recommend this company. Many thanks to all staff involved.

Went to see headstone. Love it. I did look around before I ordered it, and I still think there is nothing like it in the whole cemetery. Looks very classy with the silver lettering. Please pass on my thanks to those involved. Also, whoever erected it was very considerate to what was already there and replaced items respectfully. Already recommended your company to a lady who saw it and hasn’t had hers done yet. Thank you!

This was a custom memorial.